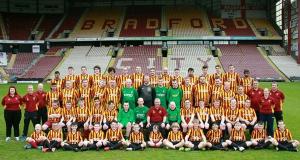 Bradford in Finals of FA Cup!

Bradford Disability Football Club (BDFC) have been confirmed as finalists in the People’s Disability FA Cup! The West Yorkshire side confirmed their place in the final by wining the West Riding FA Disability Festival in April – but also received a supporting nomination from the County FA. Bradford will now battle it out for the prestigious award in Manchester on Monday 25th May.

The People’s FA Cup is a five a side format where around 20 disability festivals have been held throughout England. The target for this year has been the lower ability levels which is aimed at inspiring participation on a regular basis. BBC Get Inspired will be filming at the finals day and sharing the stories of not just the disability teams but all the teams entered into competition. The winning teams will be invited to the FA Cup Final at Wembley to enjoy the match and receive a pitch side presentation of their trophy on 30th May.

BDFC was founded in 2002 with an initial grant of £1,000 and 8 players. The BDFC now has over 135 members aged from six to 60 – and is growing in its profile and it’s membership every year. The club has 11 pan disability teams, 9 adult teams: junior teams both under 16’s and 13’s. All of the adult teams participate in the ability counts leagues in the West Riding County FA and the league three team, who are the lower ability team have already been crowned ability counts league winners for 2014/15 season and were presented this by Phil Parkinson at their presentation night on 1st May.

Paul Jubb who is both Head Coach at BDF C and the Disability Officer for Bradford City’s Community Foundation said “This is an amazing achievement for the players, it gives them that sense of pride and team spirit as well as a great day out! I think getting through this year means more to them given all the excitement the players enjoyed watching their home team Bradford City make it to the quarter finals of the FA Cup this year. ”

James Doyle, Disability Development Officer at the West Riding County FA said, “It is great achievement for Bradford DFC to be representing the West Riding County Football Association at the People Cup national finals. Bradford DFC are always really supportive of their players and regularly have representation in the GB Mencap team who play in the European Championships each year. In addition to this BDFC are core to the disability football development programme in the county supporting events throughout the season, so it is great for them to get some recognition through the Peoples Cup. The clubs achievements to date are testament to the hard work of the players, coaches and those behind the scenes. The West Riding /County FA wish them all the best at the upcoming finals”