Yeovil striker Gozie Ugwu scored on his debut as Yeovil beat Bradford, which could potentially damage the Bantams’ play off hopes.

Gozie Ugwu the only goal, which gave League One strugglers Yeovil a priceless win against Bradford, which dents their play off hopes.

The home side Yeovil are struggling in League One and find themselves in the relegation zone coming into this one. New signings Gozie Ugwu and Jamar Loza started in a new looking strike force for the home side as the Glovers look to boost their firepower in their quest for survival.

Visitors Bradford came into this one looking to get back to winning ways after losing to Rochdale last time out.Jordan Pickford is available after the goalkeepers red card against Rochdale, the extremely influential Billy Clarke is still out.

Bradford who needed to win this game, seemed to be a bit hungover from the brilliant midweek performance against Millwall – and never were really in this one. The home side who had plenty of endeavour throughout this contest, deservedly went ahead.

Debutant Gozie Ugwu grabbed the goal when he headed in Keiffer Moore’s flick home, that goal was just Yeovil’s sixth at home. The visitors knew they needed something from this game in their quest to maintain their play off push – but the visitors looked flat in this one and never looked like scoring.

The only real chance of note came to James Hanson, but the Bradford man couldn’t keep his header down after Moore’s initial error. In a desperate search to get something from the game, Bradford boss Phil Parkinson made a double substitution – but to to no avail. The Glovers hung on for a priceless win as they look to kick start a winning run to get themselves out of relegation trouble.

For visitors Bradford, this is a disappointing defeat. This is a second league defeat in a row for the Bantams, which isn’t ideal as they try to maintain their playoff push – but on a brighter and more positive note, the other sides around Bradford such as Preston, Sheffield United and Chesterfield all dropped points.

It could be argued then that this was the best day to have a off day – but the Bantams will no doubt be desperate to regain a winning run in League one. First though the West Yorkshire side have the small task of facing Premier League giants Chelsea in the FA Cup fourth round, well that should be easy then. 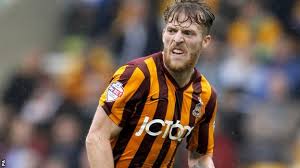 Billy Clarke who has been a key player for Bradford in recent weeks hasn’t been able to play over the festive period – but the Bantams still boast a perfect record over christmas.

As for the visitors Notts County they were looking for a positive result so they could alive their own hopes of a play off place. Notts manager Shaun Derry will be hoping his side carry on their good form who boast an unbeaten away record in League One.

The Bantams had to do with out Billy Clarke who also missed the win over Fleetwood on boxing day.

The visitors Notts County saw an effort come off the post through Jack Cassidy as the Magpies started strongly. Bradford did slowly get back into the game and went close through Andy Halliday and Billy Knott to taking the lead.

The home side would take the lead however through Billy Knott on 41 minutes. A defensive mix up allowed Halliday in behind and cut back for Knott who made no mistake to slot home for what turned out to be the games winner.

The visitors Notts County were unable to get on the scoresheet and back into the game, that was much down to the brilliant organisation of Bradford. The Bantams did have further chances to add gloss to the score line – but James Hanson and Francois Zoko missed those chances as Bradford held on for another win which consolidates their position in fifth.