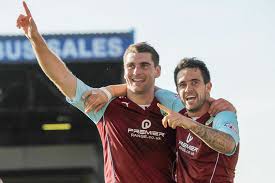 What makes football that ‘beautiful’ sport that it is in my opinion is that there is always that ‘unpredictability’ factor. In life itself more times than not you’re the master of your own fate- but in sport and more particularly football that isn’t the case necessarily.

For example there have been several occasions over the years where there has been the case that the ‘better team has lost’ . One side would have more possession and chances than the opposition – take the Stoke vs Burnley game for example.

This game proves my exact point that I want to make. Burnley despite having 27% possession in this match still came out on top. Crucial to that win, despite his modesty in the post match interview was Danny Ings.

Ings has now scored 3 goals in his last 4 games for the Clarets and will be crucial for the Lancashire club’s survival attempts. That’s stating the obvious you might think – but the virtues of having a ‘goal scorer’ are priceless.

Take QPR for example who many will be in a relegation dog fight just like Burnley, in their ranks they have Charlie Austin, who is ironically a former Burnley striker. Austin has been crucial for QPR this year and his goals have effected QPR’S points tally the win against Aston Villa for example was an example of the QPR front man’s goal scoring prowess.

In Burnley’s case they got to the premier league with Danny Ings’ goals and the goals of his strike partner Sam Vokes. Both of these players are crucial for the Clarets and with these two in their side Burnley just, just might avoid the drop.

Many saw a lack of ‘firepower’ as the reason why Chelsea’s title bid was unsuccessful, now they have rectified that with the world class acquisition of Diego Costa. In Burnley’s case the fact that they have two excellent forwards may give them the edge over sides like Leicester and Aston Villa.

You can’t put a price on a good quality centre forward, the fact that Burnley have one if not two, should only leave them in good stead in the longer run. It’s usually the same story, usually when a side doesn’t have a ‘goal scorer’ they struggle.

The fact that QPR and Burnley have at least one ‘goal scorer’ in their side gives them the edge over any potential relegation rivals. It’s goals that win you football matches first and foremost.