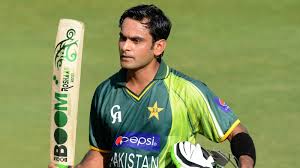 In sport one of the worst emotions that a sportsmen or sportswomen could go through is the emotion of being injured and unable to play – but for Pakistan’s Mohammed Hafeez, he is unable to play for a slightly different reason.

The 34 year old all-rounder missed the drawn second test with New Zealand due to a hamstring injury which was aggravated after being reported for a ‘suspect’ bowing action. The T20 skipper becomes the second Pakistani bowler to be reported after star bowler Saed Ajmal was also reported.
Hafeez has been an ever present figure in the Pakistani line up – and was starting to develop a good connection with Ahmed Shehzhad at the top of the order. Unfortunately due to the decision from the International Cricket Council, Mohammed Hafeez’s opening partnership with Shehzhad might not get the chance to blossom.

It’s not only his batting where Pakistan will miss the 34 year old Hafeez, the T20 captain is a very handy option as a spin bowler – and has brilliantly put pressure on opposing batsmen over the years especially left-handers with his very economical off spin.

With the world cup coming up very soon (February) , Pakistan are facing the potential of being with out two key bowlers (Hafeez and Ajmal). With the case of Mohammed Hafeez, it’s another example of the International cricket council’s attempts to clamp down on ‘suspect’ bowling actions.

Marlon Samuels and Shane Shillingford of the West Indies , Sachitara Senanayke of Sri Lanka, Zimbabwean duo Malcolm Waller and Prosper Utseya, New Zealand’s Kane Williamson ; Saed Ajmal and Mohammed Hafeez of Pakistan of course. All those players have fallen foul of the International Cricket Council’s rules in regards to bowling actions and have been reported, as the ICC look to clamp down on the issue. The West Indian pair have both been subsequently cleared – but both are banned from bowling certain types of deliveries.

As for Pakistan the ICC’s rules could see them with out two key bowlers for the cricket showpiece that is the world cup. Mohammed Hafeez does have a test on his action on Monday at Loughborough however, and Pakistan will hope the test will clear Hafeez’s action because the 34 year old is a crucial player for them and to replace a player of this calibre is a very difficult task if not impossible.